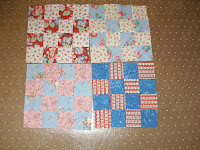 Allow me to introduce you to my quilting project that caused me so much frustration! I made four patches and attempted to lay them out in a pattern on one of the design walls and it was ICKY. So, I set it aside and decided that I would think about it later! Late Saturday night as I was preparing for bed I had a "light bulb moment" – make 16 patches. So, I used two packs of 5” charm squares and now have 25 sixteen patches. Setting? Oh, I’m working on some ideas and hoping for another “light bulb moment”. But, aren’t they cute – it’s Moda’s Picket Fences line!
Posted by Darlene at 9:30 PM

Cute, cute, cute ! I just love the Moda fabrics and the 16 patches block, they're GREAT together ! Can't wait seeing your setting !

oooh they ARE cute! Can't wait to see how they end up :)

I really love that fabric line, and they look incredible as 16 patches!

That fabric line is so sweet. It reminds me of a 1940's design. Very cheerful and feminine. You are so lucky to have the collection, you can't buy it anywhere anymore. I think your 16 patch idea is great. In one of Carrie Nelson's books (I think Miss Rosie's Quilt Collection), she has a quilt that is all nine patches that she sewed together with no lattices at all. It is surprisingly effective.

How about something along the lines of Judy's Gratitudes quilt? I think that was a 25 patch in the center, but you could modify it to your 16 patches. I'm enamored with 4 patches myself at the moment..maybe I will 'graduate' to 16 patches when i grow up! lolol

My favorite quilt that I sleep under all the time is a double 4 patch with the blocks just sewn together without sashing. I just love it.

What adorable blocks! I never think of something like that!