Charming Girls January Finishes
*
I had lots of goals for the month of January for the Charming Girls Club but I only accomplished a handful.

I got carried away this month with Schnibbles - finished (quilted & bound) Two Bits and Sunday Best. They weren't part of my January goals so I'll share those pictures later. 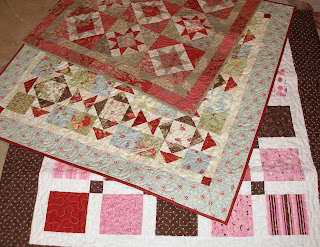 Three Piece of Cake quilt tops - still flimsies - didn't quilt & bind as planned. There's a good reason but it doesn't matter to all of you. :-) 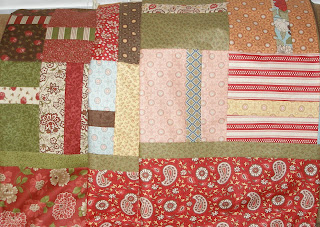 I had plans to make a gift for a bloggy friend with a Laurel (by Moda) Jelly Roll and I selected the Sticks & Stones pattern. I came to a complete stop because I was second guessing my pattern decision. I think I like it and plan to finish it this week. Let's hope the planned recipient likes it, as well.
edit - this pattern is called Strip Stacks and it's by G.E. Designs - that's what I get for trusting my memory. Sorry for the confusion. 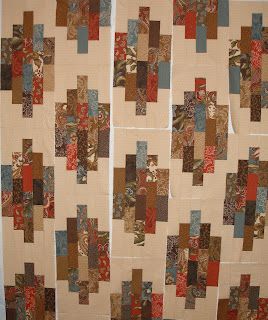 I'll be back later this week with my February goals & plans.
*
I hope you've spent time with your needle and thread. :-)
*
Thanks for stopping by - come again soon.
*
In Friendship!
Posted by Darlene at 7:22 PM

Wow, Congratulations on all your finishes. Great job all the way around! I don't think I could pick a favorite. I'm 2 for 5 on Schnibbles. I was hoping to finish up Toulouse by today but I think I have a good 2 more days to go. I did manage some time in my sewing room, which is usually difficult for me on the weekends.

That is a very productive month :)
Be proud!
I'm taking stock of some of my UFO's this month and wishing to finish more projects. Maybe I should write it on my blog and be more accountable to myself??!?

Wow! Well done for January - is the bottom quilt Sticks & Stones - I love it!
Hugs - Lurline♥

You go girl!! Your Schnibbles look wonderful! My daughter started on a Piece of Cake quilt just yesterday. Yours turned out beautiful!

Beautiful finishes and sew many! You must be having a great time. Love those Schnibbles.

way to go Darlene, looks like you are off to a good start for the year!

You got tons done...CLAPPING! CLAPPING!

Wow, you've been busy. I just love seeing the Schnibbles all over the place. Terrific colors/fabric choices on all of your projects.

Congratulations on your wonderful finishes for the month of January, Darlene. They are all gorgeous and you certainly deserve a HUGE pat on the back. Woo hoo!

Oh I do love your finishes Darlene, but I'm wondering if you every found time to sleep in January? If you did then I think you need to share the recipe for the energy. I'm sure your friend will love what you plan on sending, any gift from the heart is treasured.

Alot accomplished in January.
I love how you have photographed three quilts laying across one another - beautiful quilts and beautiful photography.

You can never get carried away with Schnibbles. I love those patterns too.

Those are wonderful....I'd be thrilled with all those finishes. Woohoo for you and don't second guess, I'm sure she will love what you have chosen. :)

You have been busy ,GREAT FINISHES! the all are really pretty. ME, I just made a quilt top and it ready to get quilted and a tablerunner to be quilted this week, depending on how many grandkids I have this week and they come first! HAve a GREAT week. Happy sewing.

Wonderful finishes and dang I can't keep up with you!! I've been trying!! I bow down.

You've been very productive! Great finishes and I love the sicks and stones quilt!!

You've had a very good month, be very proud. I don't know which is my FAV, I love them all.

Congratulations, Darlene! I am impressed with not only the number of finishes but how beautiful they all are! My question is about the last quilt: Sticks and Stones. That is a new pattern to me, and I'm interested because it looks Southwestern style. Would it work for that? Our closest neighbors might be moving, and I've wanted to do something for them. Their decor is definitely southwestern with a big wooden Indian standing in their family room. I thought a lap quilt made with some southwestern themed fabrics and an appropriate pattern might be nice. Do you think the Sticks and Stone pattern would work for what I have in mind? And where did you get your pattern...is it simple enough that I could whip it up w/o having to buy anything? Thanks!

You've really finished a lot...and I love it all! I really want to make some more of those Piece of Cake quilts this month for Christmas gifts for next year!

Really like your finishes for January! Doesn't it just feel so good to complete projects-especially those that may have been waiting patiently to be finished!!

What a great month you had! I love all of your projects! Do you quilt with a longarm? I always get stuck at the quilting part, and wait to take them when I go to the LQS to rent... Have a happy week! :-)

Okay Darlene -- I definitely need some of your mojo - can you send me a dose via cyberspace?? I love your schnibbles, and love the jelly roll quilts, too! I think the Laurel quilt is really pretty - and I think the recipient is going to love! Way to sew, Darlene, way to sew!