al·lit·er·a·tion(-lt-rshn)
n.
The repetition of the same sounds or of the same kinds of sounds at the beginning of words or in stressed syllables, as in "on scrolls of silver snowy sentences" (Hart Crane). Modern alliteration is predominantly consonantal; certain literary traditions, such as Old English verse, also alliterate using vowel sounds.

I believe it was 2001 when my friend, Cyndy and I, decided to go to the Sister's Quilt Show through Country Heritage Tours. The tour guide assigned every pair of travelers a letter of the alphabet so we would have rotating seat assignments on the bus. Every day the flash card letters would be moved up thus preventing any battles over the 'good' seats. Very smart woman!

We were R - for Rollerskating Raccoon. Cyndy and I quickly got the reputation for being a bit loud and easily excited. LOL Seriously people we were touring Oregon and visiting a variety of fabulous quilt shops. We couldn't help but be loud and excited (sometime down right obnoxious - LOL) Anyway as the tour went on people kept adding words beginning with R to describe us - Ravishing, rambuctious, righteous, rebellious, riotious, rollerskating raccoons. LOL 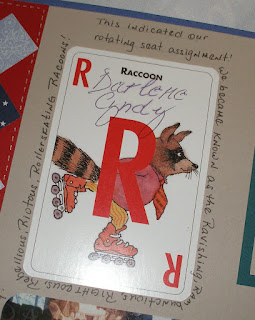 Yes, I know - what does this have to do with quilting other than the fact that we visited quilt shops and the Sister's Quilt Show?

Anna of Thimbleanna fame left a fabulous comment on my post about my Dresden plates about how much fun I could have with alliteration i.e. Darlene's Dresdens.

So, let's have some fun!

Leave a comment suggesting a word beginning with "D" to be used in an alliterative way with "Darlene's Dresdens".

I hope you're having a wonderful day! I apprecate your visit - come again soon.

Well, of course, Darling Darlene's Dresdens! What else! Love 'em!

This is funny because last sunday I was discussing amazing alliterations with my awesome angelic adolescent apprentices ( aka King's Kids Clubbers) :)
Howz about
Daring Darlene's dear, dandy, dreamy dresden dishes are SEW definitely dreamy that I am dazed with delight

(glad you have your quilt time back)

The previous comments are deliciously dripping with and drowning in delightful Darlene Dresden descriptions. I'm out of ideas :)

How about "dreadful"?!?! I found the dresden VERY tricky to sew!! Or maybe "Darlene's Dreadfully Difficult Dresdens"?!? Or maybe that would just be how Kathy's are??!

Oh know I have to think...hmmm. Darlene's Dandy Divine Dresdens. They really are dandy!!

I have been on several trips with the same company and think they are great.

Delightful Darlene's Dynamite Dresdens...woke up in the middle of the night saying that...hmmmmm...

not enough coffee this am to think up something creative
a lot of fun ones already!
Kathie

JoAnn ( Scene Through My Eyes) said...

Darling Darlene dared to dream of a dozen Dresdens draped with dainty daisies. :)