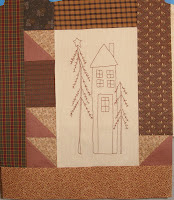 
My three Me days have come and gone but I'm not sad - it was a productive & enjoyable three days. woohoo! :-)

Saturday I was back in my sewing room bright and early. First I assembled and traced the first three blocks of the Four Seasons stitchery BOM by JoAnn Mullaly and The Country Loft (someday I will visit that shop - sigh!). Then I started my project with Simplicity Layer Cake squares. I got all the blocks done and had plans to assemble the quilt top today but didn't feel up to par. Instead I spent the day on the couch stitching the first Four Seasons block and I took a four hour nap. I'm not sure if I'm coming down with a cold or if it's allergies. Whatever it is, I don't like it - I feel punky! Ugh!

While I was sewing and stitching away I was thinking about the giveaway for my drawing tonight and had a brainstorm. When you're sewing, sewing, sewing and sewing some more - do you find yourself having to stop and wind more bobbins? 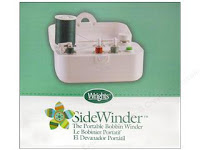 The prize for this little giveaway is a SideWinder (The Portable Bobbin Winder) by Wrights.

Factoid: this little gem was invented by my good friends, Barbara and Mary of Me & My Sister Designs.

And, the winner of this little cutie is Tammy @ Ginger Patches! A little thank you to everyone who played along with me and I especially want to thank all the new people who stopped by and left a comment.


Thanks for visiting - come again!

OH MY I used a gift card I got for Christmas and bought one of those little beautiful babies!!!! I love mine. Great prize for sure. hope you feel better soon maybe it is all the change in weather. Now sure where your at but at my house, last week it hit 80 everyday but today it was only 62 I THINK kinda cold.

Darlene
what a generous giftie.. and I have a week of no family coming up in august.. I am sending them away on holidays and I am going to sew my brains out!

well what brains I have left!

Darlene I am thrilled that you had a wonderful 3 ME days...sorry yesterday wasn't so good...but if you slept for 4 hours you needed it. Love your 4 Seasons block...isn't that a fun one to do. Lucky Tammy...I love my SideWinder. Have a great Monday.

Sounds like you had a fun time, even though you weren't feeling up to par yesterday. Great gift for Miss Tammy, thought about getting one of those but never got around to it.

Tammy will have fun with her new toy, such a nice gift. You must have really needed some rest to have that long nap. Take it easy this week and don't over do it. We've had a few cold bugs around here too.

Your blocks are so cute. When I see all of these blocks, I want to do them too. But my thing for this year is to work on what I have. Hope you are feeling better!

WOOOHOOO I can't believe I won!!! And what an awesome prize! I hinted at Christmas and have wanted one since I saw it!! Thank you soooo much Darlene! Doing the happy dance here :)

I am soooo sorry to hear that you're under the weather I hope you're feeling better soon.

I'm excited to see what you did with the Simplicity!

Love all your pincushions. I MUST take a photo of mine and post.

You had a fun and very produtive sewing time :)

I hope you are feeling better Darlene. I have also been feeling a bit crummy this past weekend and spent all Sunday on the Sofa. I think there is a bug going around. I hope I didn't give it to you!!

I just bought myself one of those Sidewinder just recently.

Congrats to Tammy, although it would have been more fun if I had won! ROFLOL! Sorry you're feeling punky--I think I have the same thing. I can't quite decide if it's some kind of bug (because two other gals in the office seem to have the exact same weird symptoms) or if it's allergies (because I swear I felt the same way last March)! Whatever it is, I hope we're BOTH feeling much better real fast!

Hope you are feeling better!

All good things must come to an end but hopefully you have been re-energized by your me time.

I do hope you are feeling better now - I certainly know what it's like not to feel well these days! Love the block you stitched!
Congrats to Tammy for winning your wonderful give away - I'm sorry I missed it!

I hope you are feeling better Darlene.
Congratulations to Ginger Patches!