(May selection for Another Year of Schnibbles 2012)


I'm a true urban cowgirl - raised in south Texas on a ranch with cows, horses, goats, chickens, etc. As a teenager I moved to the big city and that's when I became an Urban Cowgirl. :-)


As an urban cowgirl I never met Doc Holliday. Sigh! If I thought there was an chance that I could meet him then believe me I'd hop in my Rodeo (although I sold it recently - LOL)


I'd pull up to the saloon (urban bar) where I heard he was playing cards and challenge him to a game of poker. OK, I don't know how to play poker but that's our secret - sshhh. LOL He'd have his bottle of whiskey and I'd order a caffeine free Diet Coke. I believe that Jesse James and Billy the Kid (he was under age but don't tell anyone) would be drinking beer.


As he stared across the table at me, Doc Holliday would shuffle the cards, have Jesse James cut the deck and deal around the table. The game would be going well because I was winning - LOL. All of a sudden Billy the Kid would stand up, pull his six shooter and accuse Doc Holliday of cheating. With my eyes full of fear I'd grab the money and dive under the table, after all I don't own a gun. I managed to run out of the saloon (urban bar) with all the money and hop on my horse (OK, my Rodeo) and ride off into the sunset.


I don't know whether or not Doc Holliday was cheating but he definitely had Card Tricks up his sleeve. LOL 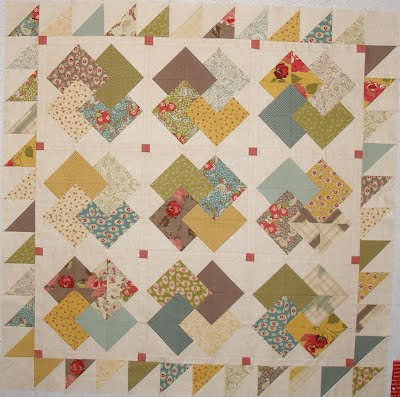 Thank you for visiting and reading my silly story!


Y'all come back now, ya hear!

Lol!! I love the Urban Cowgirl line; must get my hands on some soon.

What a great story, but what did you do with all the money you ran off with?

oh love that quilt, great FABRICS , fun choice!
have the pattern out on the desk, just trying to finish a few other things first
I am always late to the party!
Kathie

OMG I'm "crying laughing"...you are too funny! Love your story! And I'm nuts about your Doc!

Yeah, what did you do with all the money? Spent it on something silly like fabric I suppose. Great story! And beautiful quilt.

Always thought you had wonderful tricks up your sleeve:) Thank you, Urban Cowgirl!

Coincidence, I choose this beautiful collection for my next schnibbles.
Love your top.

That's quite a story--------good imagination and very nice Schnibbles.

Card tricks is one of my favorite blocks! Funny story to go along with it.

Gratz on making it out with the cash! Love your Doc version.

Thanks for the first laugh of the morning! So when did you two turn into Wabbits? Maybe we don't want to know...?? TMI..?
Love the new quilt...the fabrics are amazing!!!
P

Ok now you've done it! I've been trying to keep myself from buying Urban Cowgirl but you pushed me over the edge. This looks great! Now off to do some shopping.

LOL...a great story for sure. Love your Doc. I'm afriad I didn't even start mine. Maybe at quilt camp this week. (hugs)

Oh my gosh what a tale. Love the quilt.

I have a fond spot for card tricks, it looks great! It may have even been one of the first blocks I made when I started quilting.

Oh, you always make me laugh! Your card trick design is great too.

Your Doc quilt looks great ... loved the story too.

LOL! You've always got some trick up your sleeve! Next quilt you ought to add some kevlar to protect you from those flying bullets. I imagine when you ran out of the saloon, you ran right into the nearest quilt store. Love your quilt. That really is a great pattern and you stitched it up in one of my favorite lines.