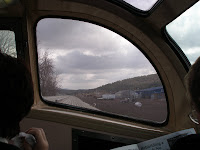 We had an incredible time! My DH was in his glory and had so much fun - I enjoyed just watching him. :-) I'd never been to the Grand Canyon so he said it was great to watch my face the first time I saw it. Oh, my goodness I was in complete AWE.

I won't bore you with a lot of details about the train journey but I do need and want to share a few tidbits. It's only approx 65 miles from Williams, AZ to the Grand Canyon but on the choo-choo it took over two hours. It was a 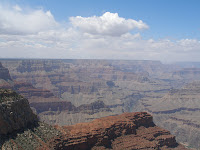 great journey - we saw desert, prairie, pine trees, etc. On the way up, we rode in a "dome car" and sat in the second row so we had an incredible view and on the way back we rode "coach" and experienced train robbers - obviously staged but fun.

This was only my second train ride - the first we took the "troop train" from Frankfurt to West Berlin (it only traveled at night since it traveled through communist territory - wow those are some memories!). I really enjoyed it this time because there was so much to see and enjoy.

All in all it was a great time and my DH says that he would only "change" two things - the weather (it was super cold and windy) and he had hoped for a steam engine rather than a diesel. They only run the steam engines in the summer time.
Posted by Darlene at 7:45 PM

So glad you had fun, and that your dh enjoyed himself, what a stunning photograph.

It sounds like you had a great time! What an awesome picture of the Canyon!

WOW, WOW ! This was something, for sure ! I'm so glad that you both enjoyed it (and glad that you're back, too ! I missed you).

Sounds like a great trip! I've been wanting to take a train somewhere--I'll have to check into it one of these days!

Welcome back! Missed you while you were gone but I'm glad you had a great time. Bet you loved the train ride :-)
Glad hubby enjoyed it too!

I am so glad that you all had a wonderful time! What a beautiful picture of the Grand Canyon. Nature's Wonders :)
Happy you're back...I missed you!

Glad to read that you both had a wonderful time. I love trains! Geeezzz, I would have thought that adding quilt shops along the way would make a great change! ;o) lol Thanks for sharing your experience!

Grand Canyon is one of the few sights that live up to it's hype. I was impressed with it too. I had never heard about the train but it sounds like a blast too. Something else to put on the "to do" list.

So glad to hear that you had such fun. I'd like to do a cross-Canada trip one day ....

I've never been on a train, nor to the Grand Canyon! What an exciting trip for you two. I'm pea-green with envy (although it is a lovely Pandolph green)!

Sounds like you had a wonderful time! The ONLY time I've ever taken a train was a similar experiende in Germany. We took the "night train" from Munich to Berlin....in and out of East Germany all night. Wasn't the most pleasant experience as there were 6 of us in the car in bunks and I was on one tf the top bunks. I haven't really had the desire to get in another train since....LOL

We all went to the Grand Canyon a little over 2 years ago when we took my hubby's family and my family to Las Vegas for our wedding. One day was devoted to a bus trip out to the Canyon and Hoover Dam. I loved it! We couldn't go from Maryland to Vegas and be that close to such a wonderful place and not go. So glad you had a great trip!

I have been on that troop train. I didnt' like the guards around it every time we stopped. my DH was so sick coming back, they almost had to leave us to come home when we could get papers arranged again. UGH. Funny..my son when he saw the Grand Canyon "Mom, its just a big HOLE in the ground!" Ah to be 10 and JADED!

What a wonderful trip to the canyon and to ride on a train too. Thanks for sharing your fabulous journey.

Happy to hear that you had a safe and enjoyable getaway! Your photo of the Canyon is wonderful.

I'm glad you had such a nice time, Darlene. What a great treat for you and your DH!

The train ride sounds great. Isn't the Grand Canyon utterly amazing. You can't photograph it -- or capture it in any way, you must experience it in person. Stunning!!

The train excursion sounds wonderful. Someday we hope to go to the Grand Canyon.

Oh I'm so glad you had a good time! That trip sounds really fun!

Isn't the Grand Canyon marvelous - it almost hurts my head to look at it. Just so much for my brain to take in *s* Glad to hear the train trip was a good one. We have thought about trying it and just never got of the fence. I'll surely want to do so now.