I was visiting Karin's blog the other night while searching for 'the' project for my PKM fabric when I had that light bulb moment I told you about. YES!!!!! She was showing all the pieces parts to her Scrap Jars Stars quilt. This wonderfully scrappy quilt is from Amber/A Little Bit Biased. I lurk on Amber's blog, therefore I'd watched her progress on her quilt, secretly coveting it. LOL Amber has a terrific tutorial for the block.

OMG, it really spoke to me but for reasons that simply don't matter I didn't jump in with both feet.

It was time to jump in because I knew it would be the perfect project for my PKM fabric. I had hoped to start working on my Scrap Jar Stars (OK, I don't have scraps but I can make scraps - LOL) on Friday but it wasn't meant to be. Sigh! Instead yesterday I spent ALL day in my sewing room having more fun than should be allowed. LOL I know you've experienced the same feelings with a project or two (OK, maybe three).

There was lots of cutting to be done. I'd done my math and decided I wanted to make 30 blocks.

I made the first batch of half square triangles and I couldn't stand it I HAD to make the first block. 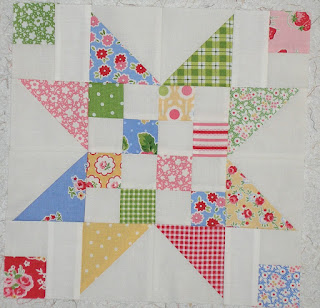 TA-DA - yes there are some duplicate prints in the blocks even though I tried hard to avoid it. ack!!! LOL I planned to employ Jack the Ripper but then decided that in the grand scheme of things it wouldn't matter. OK, maybe I'm just being lazy. LOL

I decided to make a second block to see if the duplication of prints would matter. No picture but trust me when I say it didn't matter. LOL 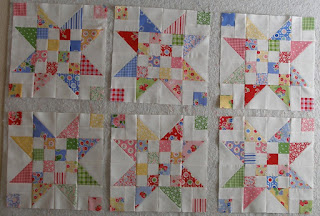 I couldn't stop myself - really I couldn't - I had to make more blocks!!!! With each finished block I was getting more and more excited. The blocks are looking even cuter than I thought they would. BIG, BIG SIGH!!!

There will be sashing and corner stones between the blocks thereby creating a secondary pattern - a nine patch.

Can you guess where I'll be this afternoon? My "Happiest Place on Earth" - my sewing room. wahoo!!!!

Enjoy a pieceful day - thank you for visiting.

In Friendship!
Posted by Darlene at 10:15 AM

Wowsers - what a lovely bunch of fabrics!

BTW, most of MY visitors are referred by YOUR site - I just wanted to THANKS!!! 8-))

Wow, this block would look great with 30's fabric too.

It is going to be such a cheerful looking quilt. How could you not be in a good mood when you are making something so happy looking.

Oh girlie, I LOVE those blocks. I'm going to have to head over there and check things out. You are so good with fabric color, scale and value! Amazing!

Scrappy excites me, and so do these blocks!!

I love your blocks. This quilt is going to be beautiful.

love these Darlene i can see why they were addictive,well done.xx

OHMYGOSH THEY'RE SENSATIONAL!! I have been seeing this block around pinterest and thinking it was pretty interesting!!! NOW FOR SURE I HAVE TO TRY IT! Really great!

I went right over to check it out...oh yeah, you nailed a good one! What size are you going for? You said your using fat eighths?

I am so making some of those myself soon. A few things in line ahead of them, but not too many (pushing projects out of the way). Yours are lovely and the few duplicate fabrics won't matter a bit!

Your blocks are beautiful! This is another one I want to make. Maybe it will be my next scrap quilt after I'm done with the one I'm working on now. :0)

those blocks are soooooo pretty! no wonder you couldn't stop at just one!

Great choice for the PKM fabrics and don't worry about the duplicates. It all looks great. I can see I'm going to love this quilt.

Love, love these! They are so happy and sweet. Me, I like big blocks because they make big quilts faster, so I would keep the 5 x 6, but that's just me :) Enjoy, enjoy, enjoy!

I love that Darlene! It looks like the perfect summer project!

I love that secondary pattern you're going to get when you join these blocks!

They are looking so beautiful. When you asked about the size, go big or go home came into my head!

such sweet fabric and beautiful blocks!

I took a peek at the tute. I love Amber's 4 block one. I think I will make one but a little one. Your blocks are fab!

It's so pretty! I can totally understand why you couldn't stop making them.

Yay! So glad that you are joining in on the fun...or obsession. :) The stars look amazing in PKM! It was my pleasure to help push you over to the dark side..it's what friends do. With all of the fun stars popping up, it won't be dark over here for long!